In a country founded on the idea of individual freedom, Americans value the idea of choice.  We inherently believe that maximizing individual freedom increases our individual welfare or happiness and that the best way to maximize individual freedom is to maximize choice.  A bar with 120 beers on tap is perceived better than a bar with two beers on tap.  36 varieties of chicken wings on a menu is perceived better than just a single offering of generic buffalo chicken wings.  Psychologist Barry Schwartz describes this in a Ted Talk as the official dogma of western civilization – the concept that we place unparalleled value on the freedom of choice. 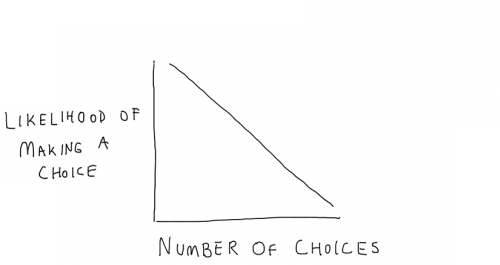 As with many things, there is a gap between what we say and what we do.  We say we want choices but our brains hate making them.  When faced with more choices, we are less likely to make any decision – a phenomenon known as choice paralysis.  In a famous experiment, two psychologists found that shoppers in the same store were 10 times more likely to purchase jam when faced with 6 varieties than when faced with 24 varieties.  Exploiting this behavioral bias is one of the foundations of success for stores like Costco and Aldi with limited brand selection.

Most working Americans are confronted with a choice after they depart a job or retire: leave investments in an employer-sponsored retirement plan (i.e. 401k) or roll them into an IRA (free of any taxes).  Many choose the path of least resistance in spite of the fact that the economically rational choice overwhelmingly tends to favor moving assets to an IRA.

Just as jam shoppers capitulated to choice paralysis when confronted with more jam options, research shows that 401k plan participants are more likely to participate in a plan with fewer choices than when there are many.  If adding 50 more investment options to a 401k plan increases the likelihood that participants will not participate by 60%, imagine what happens if they are presented with tens of thousands of investment choices in an IRA.  It is simpler for many to leave assets in a 401k, despite the drawbacks, as the choices are more limited and the decisions resultantly seem easier.

In fairness, many financial advisors promote IRA rollovers for the wrong reasons as they free up assets for product sales (annuities, commissioned investments, etc.).  Consumers have good reason to be skeptical of this conflict laden advice.  At Resource Planning Group, we do not sell any products and we are financially indifferent to assets held in a 401k or IRA.  When we discuss this rollover decision, it is simply an evaluation of the benefits and drawbacks.  The remainder of this posting contrasts the circumstances that favor leaving assets in a 401k or rolling them into an IRA.

Potential Benefits of Keeping Assets in a 401k

Drawbacks of 401(k) Relative to an IRA

As with nearly all financial planning decisions, the answer is: it depends.  In most cases, the benefits of an IRA rollover overwhelm any benefits of leaving assets in a 401k.  Simply quantifying the cumbersome 401k administrative expenses that can be completely avoided in an IRA provides ample justification for an IRA rollover.  Generally, a departed employee has no desire to subsidize the high administrative costs and revenue sharing of his or her former employer.  Limited low-cost investment choices in 401k plans tends to further justify a rollover in most cases.  Alternatively, there are unique circumstances that favor leaving assets in a 401k plan so the answer for one person may not be the same answer for another person.

Although the 401k rollover decision requires making choices, it is not one that should be avoided or taken lightly.  Whereas buying or not buying jam at the grocery store next week is a choice of little consequence in the grand scheme, the decision to leave assets in a 401k or move them to an IRA often has substantial implications.

What are your thoughts?  Have questions about the pros and cons?  Please do not hesitate to comment with your suggestions or questions.